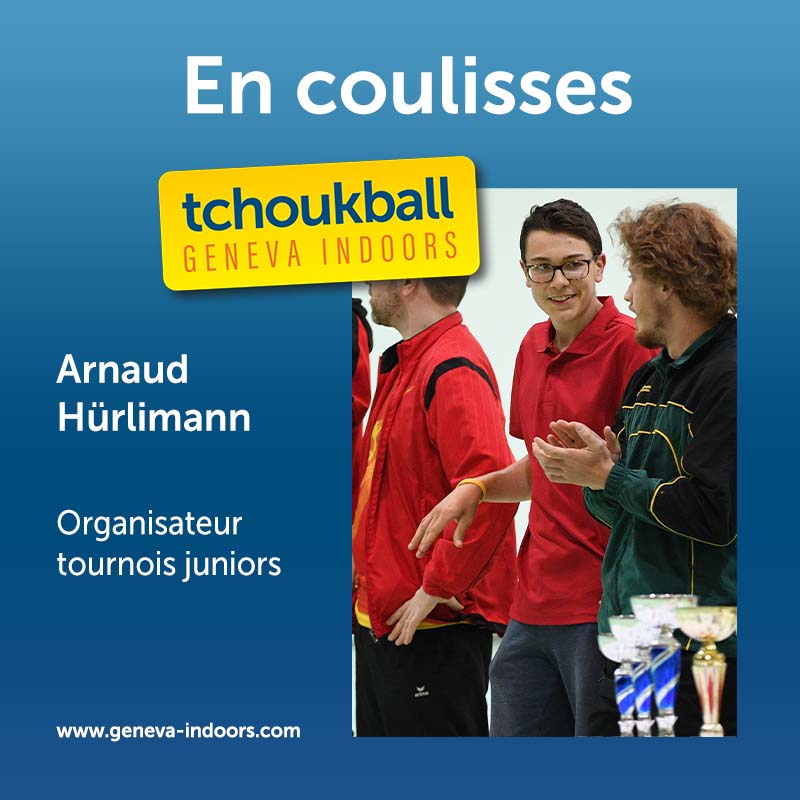 Please introduce yourself
I started playing tchoukball at the age of 7 with the Nyon Tchoukball Club. I then played in all the junior categories, before joining the “Ligue B” team in 2019 at the age of 14. At the same time, I am a member of the Swiss M18 selection, with which I had the privilege of competing in the Nations Cup in 2019. Following the long cut caused by the pandemic, I decided to get involved much more in my sport. So this year, I took my referee grade, helped to set up the Urban Tchouk and the camps this summer, took part in the organisation of junior tournaments, etc.

What is your actual function in the Tchoukball Geneva Indoors?
I am currently part of the team that organises the junior tournaments and the commentary team. On top of that, I have chances to take part in the Nations Cup.

How long have you been in this role?
I’m still very new in the staff, I’ve only started this season, in order to gain experience for my professional future.

What is your job before, during, and after the tournament?
I am responsible for listing the equipment necessary for the junior tournaments. The morning of the tournament, I’ll have to lead the team setting up the playing fields. During the tournament itself, my task is to make sure that everything is going as well as possible. I will also be present for the preparation work at the beginning of December as well as for the tidying up after the tournament.

What are the challenges, the key moments of your function?
The main challenge is to be able to react quickly if the program suddenly changes.

What other sectors do you collaborate with to carry out your work?
I work with the logistics sector and with the referees for the junior tournaments. But what is most important is the contact with the players, understanding their needs, and to adapt according to them.

Have you ever had a particular, stressful or touching situation that you would like to share?
I haven’t had any experience as a staff member at the TGI yet, so I haven’t been able to experience such moments yet.

What is your best memory of the Geneva Indoors?
All the times I played in the tournament, the different victories in the various categories,… But what has marked me the most over the years is the incredible atmosphere and the organisation that makes this tournament unmissable.

The TGI 2021 are approaching quite fast. After a forced break last year, what moments are you particularly looking forward to for this edition?
I am especially looking forward to being able to play again with my club and the national team at this incredible tournament.