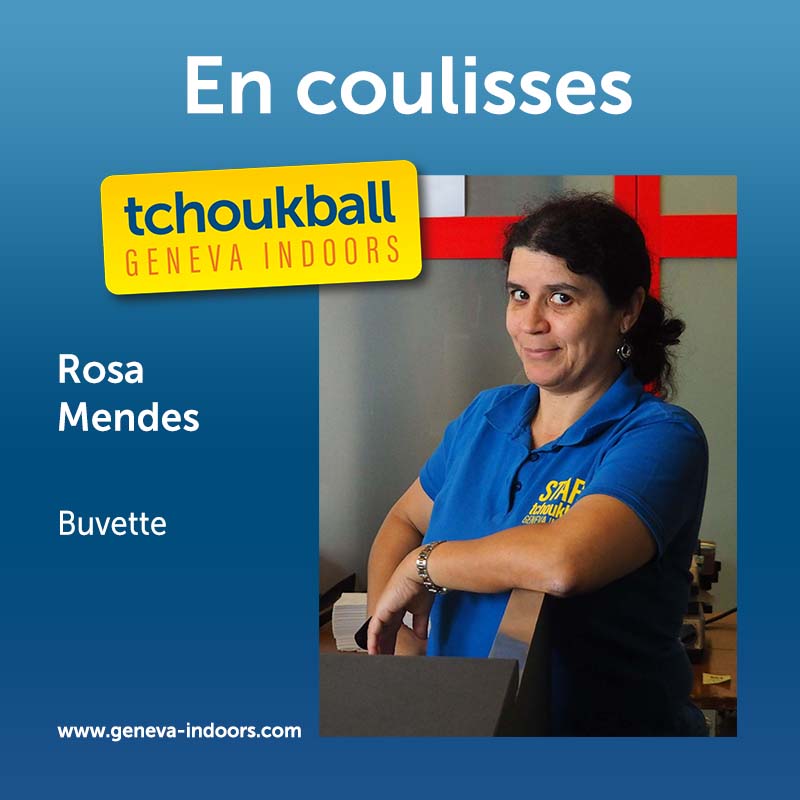 Please introduce yourself
I discovered tchoukball more than ten years ago, when my daughters started playing in the Geneva Tchoukball Club. Now, since I don’t work on weekends anymore, I like to come and help the club when necessary.

What is your actual function in the Tchoukball Geneva Indoors?
I am currently a volunteer at the refreshment bar, and I also take care of the jersey stand.

How long have you been in this role?
Even though I have now known the sport for 10 years, I started to get involved a bit later, about 5 years ago.

What is your job before, during, and after the tournament?
My task before the tournament, in fact the morning before the matches, is to arrange the products at the refreshment bar, in order to make it attractive. During the tournament, I take the orders and serve the hungry players. It’s a task that keeps me busy all day, since the players eat a little bit anytime. At the end of the tournament, when all or almost all the players are gone, I take care of the tidying up of the stand as well as the cleaning.

What are the challenges, the key moments of your function?
The main challenge for someone who takes care of the stands like me is to manage the busy times and to deal with orders which overlap. This is often difficult, because there can be very few customers during the games, and then, all of a sudden, everyone comes at the same time. It is essential for us to be as efficient as possible with the serving, because the players often do not have a lot of time between games and, above all, they are hungry.

What other sectors do you collaborate with to carry out your work?
I work mainly with the sector that deals with the sale of jerseys.

Have you ever had a particular, stressful or touching situation that you would like to share?
At first, when I was not used to it, the waves of players were rather stressful. But then, with more practicing, I got used to those kinds of moments. Otherwise, each edition is, in my opinion, different, with a different atmosphere and various teams. In my role, I get to see almost all the players, players from many different countries and regions.

What is your best memory of the Geneva Indoors?
Even though my role as a saleswoman leads me to meet a lot of people, my best memory remains a memory as a supporter. In 2019, my daughter competed in the Nations Cup with the Swiss U18 women’s team. They finished second, and that was a source of great pride for me.