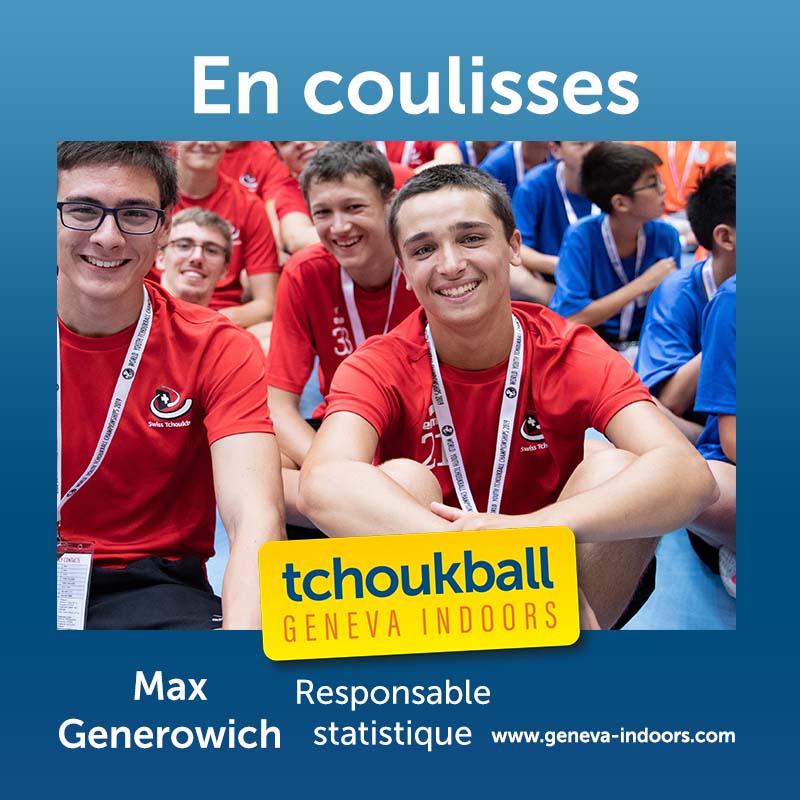 This year to get ready for the Tchoukball Geneva Indoors, we’ll present every week a different sector of the event. This week you’ll meet Max Generowicz, tchoukball player from Geneva, He is in charge of the statistics at the event and describes here his tasks before, during and after the event.

Please introduce yourself
I discovered tchoukball about eight years ago during a sports class in elementary school. I then played in the juniors, worked my way up the ranks, then played with the Geneva Dragons for three years. I was also part of the Swiss U18 team for a few years. Currently, I play in England.

My first participation in TGI dates back to five or six years ago, as a junior player. Subsequently, I started to get involved in the staff as a referee of the junior tournaments.

What is your function at the Tchoukball Geneva Indoors?
I am currently in charge of the statistics of the Nations Cup.

Since when do you hold this role?
I’ve been involved with this sector almost since its inception, which is a little over a year ago, although the idea had been around for a while.

What is your job before, during, and after the tournament?
Before the tournament, I have to imagine a system for collecting statistics. Then this system is tested and fine-tuned. Then, I have the responsibility of training the people who will take the statistics during the matches.

In addition to this data-taking system, I also have to organise the collection, backup and synchronisation of the latter so that they are published as quickly as possible (live, ideally).

During the tournament, work is mainly focused on collecting statistics, but also on their dissemination, if possible live.

As soon as the tournament is over, I provide other data that could not be published during the tournament, such as the “boxscores” in 2019.

What are the challenges and the key moments of your function?
For this role, preparatory work is essential. A good data collection system can make it possible to have live data, and a bad can jeopardise the project and having no data to share. The challenge is to get all this data together live with a small group of people. The key moment will therefore really be during the matches, when you have to be very focused over a long period.

What other sectors do you collaborate with to carry out your work?
I work a lot with the communication sector, since it is the latter that will disseminate the statistics that my sector will collect. For this edition, we will be working especially close with the commentators, to add value to what they say during the game.

Have you ever had a particular, stressful or touching situation that you would like to share with us?
The statistics sector having been created after the 2019 edition, we have not yet really experienced a moment during the TGI as a “statistics sector”.

What is your best memory of the Geneva Indoors?
As already mentioned, I do not have any experience with the statistics sector yet. Nevertheless, I remember very well my years as a player with the Geneva Black Mambas (Geneva Espoirs), and our great rivalry with the German team from Weimar.

The 2021 TGI are fast approaching. After a forced break last year, what moments are you particularly looking forward to for this edition?
I think seeing statistics displayed in live images during breaks for semi-final or final matches will be the moment when I realize that I will have achieved what I promised, and that this statistics project will indeed be launched.