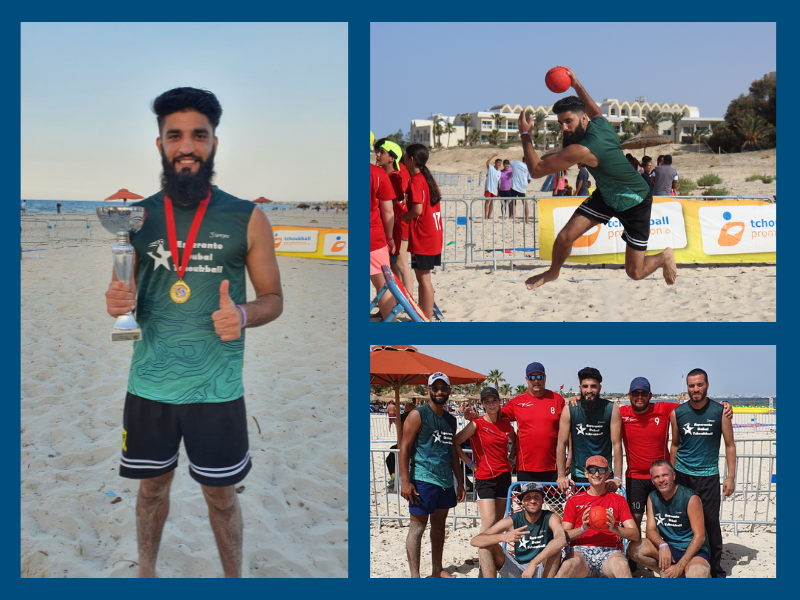 Last weekend I attended the 2nd edition of the Sahara Beach Tchoukball Festival, which was played on the beach of Monastir. It was the opportunity to watch the amazing development of Tchoukball in Tunisia, to meet up with old friends and to make many new.

I started to chat with one of the players from the Esperanto Dubai team lead by Julio Calegari and I would like to introduce him to you:

Ummar Abbasi is 23 years old and he is from Kashmir. He started playing tchoukball in 2017, thanks to the introduction to our sport by his volleyball coach Mr. Manzoor Ahmed and the General Secretary of Pakistan Tchoukball Federation Mr. Emmanuel Asad. In 2018 he was selected by the Pakistan national team, and he attended an international tchoukball training course delivered by Chris Huang from Taiwan.

Ummar loves playing tchoukball, to progress and to prove to himself that he can become better and better. He also enjoys travelling to different places and to meet new people and players from different countries. Today Ummar lives in Dubai, where he regularly trains with his teammates who come from all over the world and who are trained by Julio Calegari.

While talking to Ummar, I started to promote the Geneva Indoors to him and very quickly he interrupted me by telling me: “Erika, I know the Geneva Indoors. I have been watching every single video of all the games. It is thanks to those videos that I have been able to make so good progress in tchoukball. In 2018, when I watched for the first time, I was very inspired by Antonio Nostrangelo from Italy. I have been watching his way of playing to improve mine. And then I started to watch Yanis Bruhin and the players from Taiwan as well!”

I was speechless and so, so moved! Since 2016 we have been putting a lot of effort to film the games of the Nations Cup in order to contribute to the promotion of our sport. But having travelled from Geneva to Tunisia and just getting the confirmation from a young player originally from Pakistan, living in Dubai, that our work has made a significant difference in his experience of our sport is just amazing! It was one of those magic moments where I felt that all the hard work and the many, many hours we spend in doing a high-quality job for the Geneva Indoors truly makes a difference and has a global impact!

Having travelled back from Tunisia, it is the memory of such moments and meetings which give me the motivation to give my very best to organise the best possible Geneva Indoors. Because the Geneva Indoors is not only a tchoukball competition but a dedicated space for meeting old and new friends, sharing our common values, and creating memories of a lifetime. I am looking forward to welcoming many of you, from Switzerland, Europe and all over the world in December in the city our sport was created 50 years ago.